Went to hair stylist extraordinaire Jeananne for a trim on Election Day so I’d look presentable for TV analysis that night. She’s a Mount Greenwood girl whose dad was a fireman so it’s no surprise that she liked Gery Chico in the Chicago mayor’s race. That’s the demographic. But she hadn’t voted that day and didn’t plan to. Forgot to register at her new address and couldn’t get enough time off work to make it back to her polling place. So Gery lost that vote. It didn’t affect the outcome, but it did send a message about a missing piece of this messy political system we call democracy.

The turnout in Chicago on February 22, the first contested mayor’s race in two decades in a city mired in multiple crises, was just over 40 percent. By way of comparison, 80 percent of the city’s voters raced to the polls for 1983’s historic election of Chicago’s first African-American mayor, Harold Washington.

You’ve seen and heard all the explanations for the abysmally low turnout in this latest “important and historic” election. The media created a sense of inevitability for Rahm Emanuel, so there was no suspense. He had enough money for endless TV ads highlighting super-star supporters like President Obama and former President Clinton. The black community never warmed up to gaffe-prone “consensus” candidate Carol Moseley Braun. Chico and Miguel del Valle split up the Latino vote. And the February weather was cold and snowy. Back in 1983 there was “real” history unfolding in front of us as Washington, a journeyman congressman and long shot underdog at the outset, built a once-in-a-lifetime “movement” that included most of the city’s Blacks, Latinos and progressive whites—just enough voters to defeat incumbent mayor Jane Byrne and then state’s attorney Richard M. Daley. 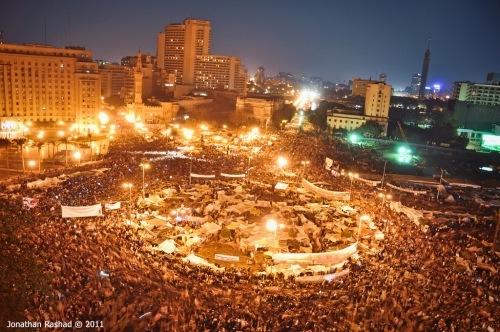 The elections were, in fact, very different, even though both were labeled “historic.” 1983 was obviously more exciting. But not more important. And that’s why the relatively low turnout on February 22 is so disappointing. We’ve been riveted for a month by the unbelievably dramatic stories about the democratic push that is sweeping across much of the Arab world like a California wildfire—from Tunisia to Egypt to Yemen to Libya and beyond. Hundreds of thousands of people, oppressed for decades by authoritarian regimes, risking their lives by marching and demonstrating. The spirit of colonial America circa 1776 prevails as rulers step down and puppet governments pledge to unbuckle the political straight jackets so their people can breathe in the sweet scent of freedom and democracy—scents we’ve been inhaling for more than two centuries.

Government in the United States is in crisis at all levels. Massive budget deficits, bloated bureaucracies and unsustainable retiree health and pension obligations. Not enough cops on the streets, good teachers in the schools, efficient services or best practices to mimic. All of this applies to Chicago and should have been motivation enough for a big voter-turnout, regardless of the mitigating circumstances.

Emanuel said the “election was about reform,” and he’s made a lot of encouraging promises. The BGA will be watching closely, shining a bright light on his government and holding him accountable. And so will the hundreds of “citizen watchdogs” we’ve been training in sessions around the city and suburbs. We headed out to Joliet for a training session this week, with a follow-up one next week. Fifty motivated people who care about their government showed up. They understand, like we do, that our hard-earned tax dollars have to be spent on us, not the politicians. They will be watching the Joliet mayor and city council and the Will County board. But it’s likely they’ll also be paying close attention to Chicago because it’s the big dog in the eyes of the media, and with a high-profile, one-name mayor-elect, the stories will be irresistible—or at least unavoidable.

Jeananne will be watching the same stories. And when it comes time to grade Emanuel’s performance in a re-election campaign, if there is one, she’ll hopefully be registered to vote in her new neighborhood so she can weigh in on the job he’s done. That’ll mean she understands her obligation as an engaged citizen.

We need an army of engaged citizens to advocate for better government alongside reform groups like the BGA. Better government is a right and a responsibility, and we can make it a reality if we’re all in this together. That’s the dizzying dance of democracy. And the ticket to the dance floor is a receipt from the polling place on election day.